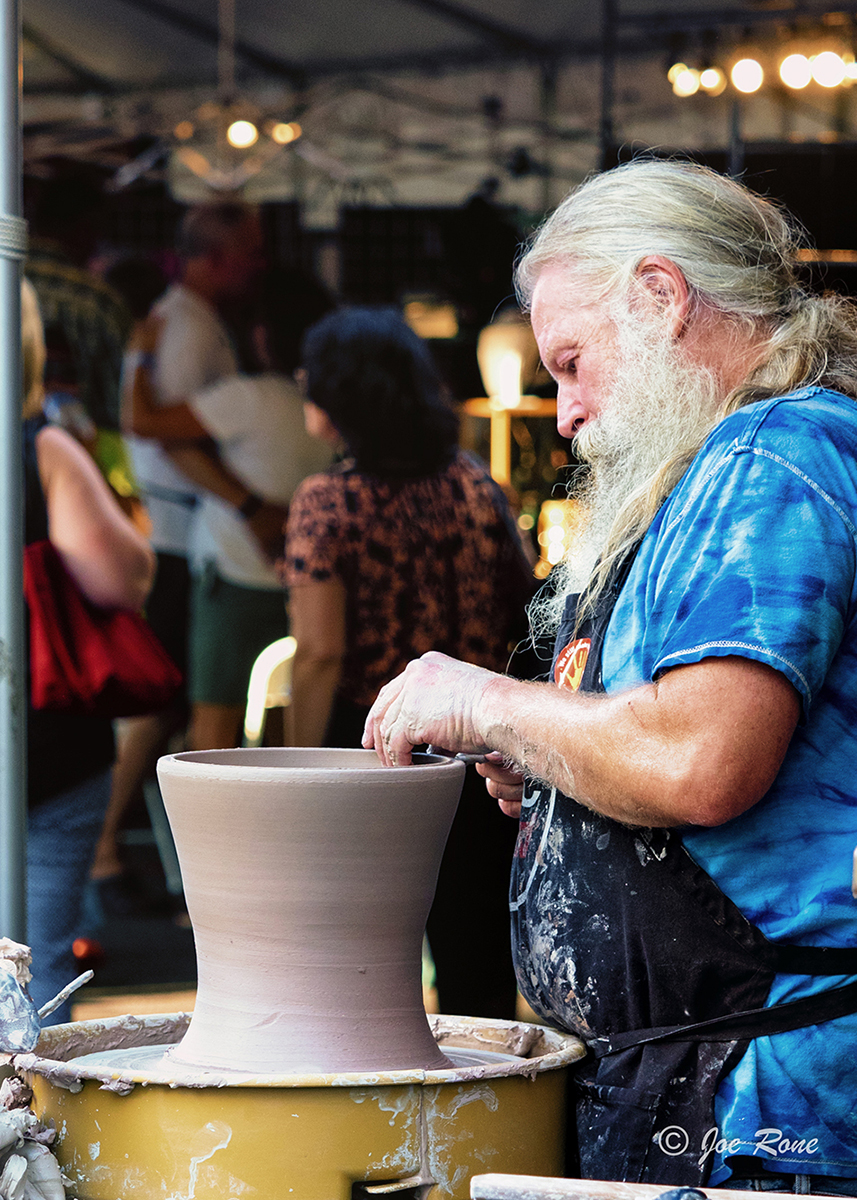 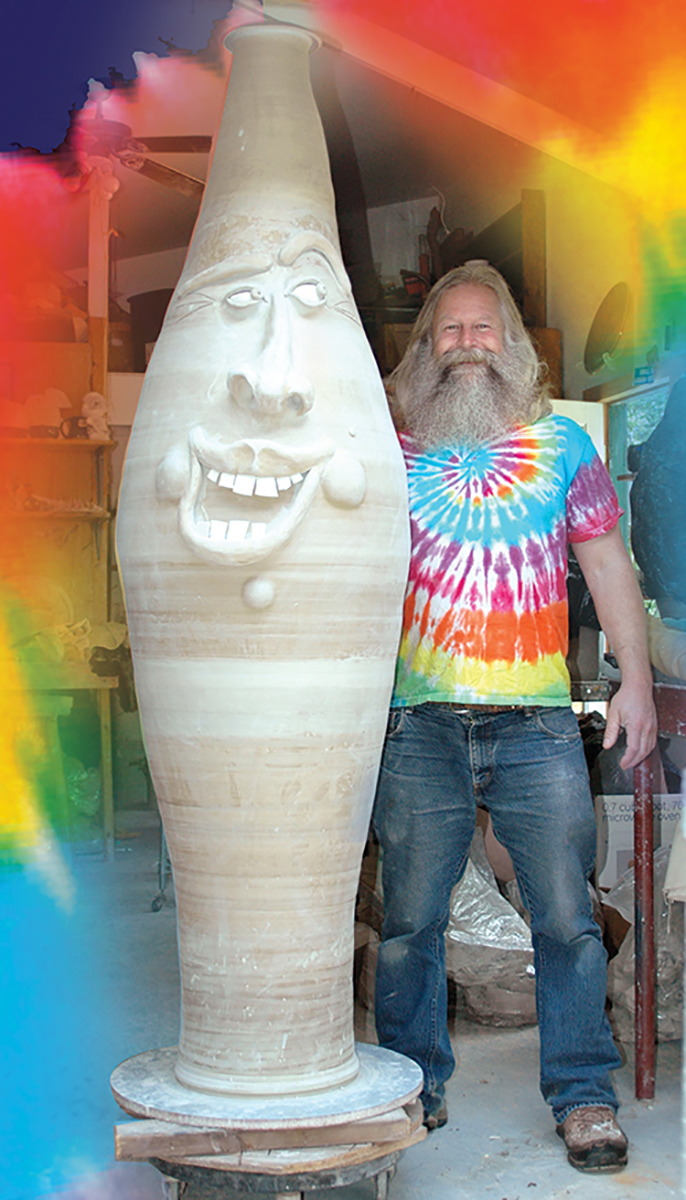 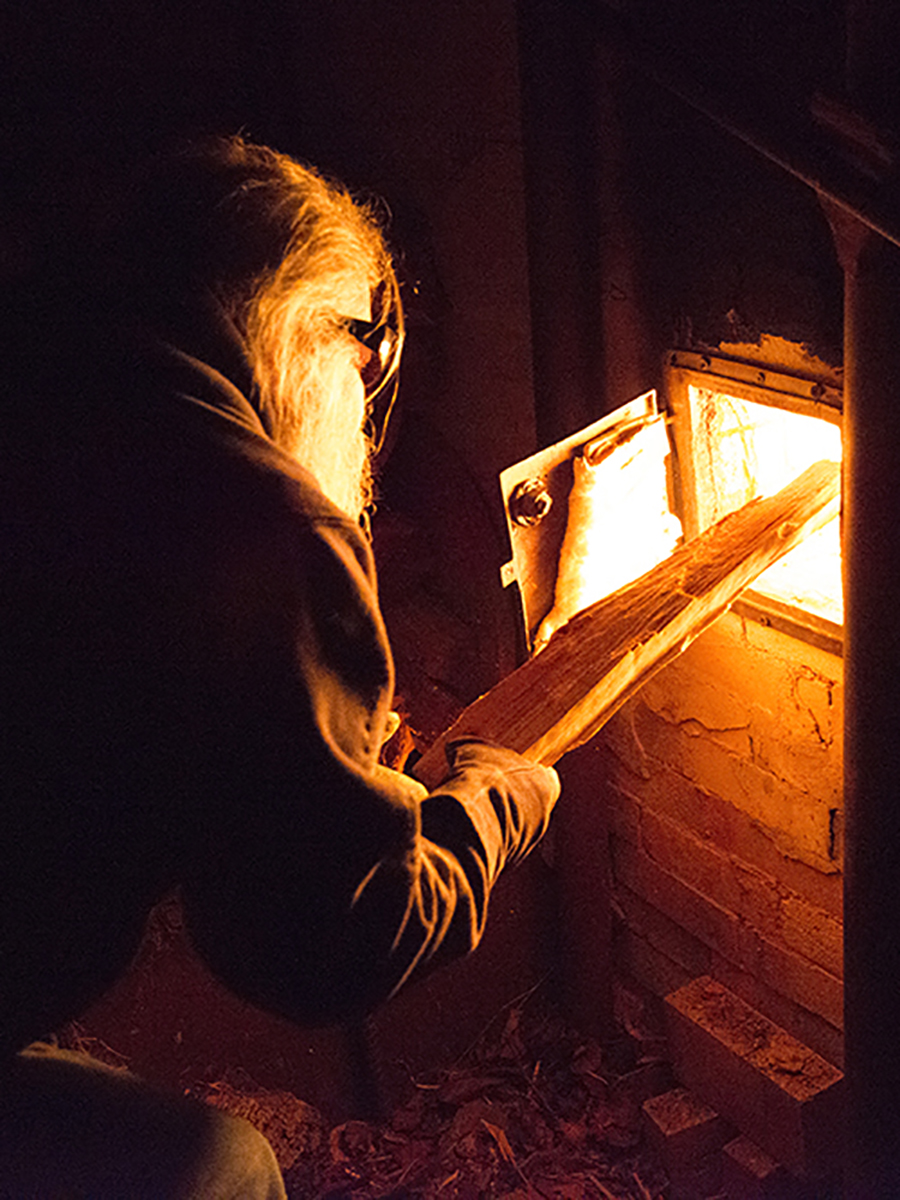 On any given day, Rob the Potter can be found throwing on the wheel, kiln sitting, or teaching others about the rich traditions of southern folk pottery. He is modest about himself and his work, but is well known for the “big pots” he loves to throw and for his generous and fun-loving nature. His signature pieces are large, human-sized face jugs with smiles as big and infectious as his own. “Pots are like people,” Rob likes to say, “each one is unique and none of them are perfect.” At Smoke in the Mountain Pottery in Brasstown, NC, Rob is living his dream as a folk potter and sharing his passion for clay.

Rob was born in Ohio in 1956 to a working class family who raised him in Colorado, where he would later work for the Rio Grande Railroad Company and run his own roofing business. Fleeing the snowy peaks, he moved to Key West, FL and spent the next ten years working as a fisherman, mostly as a captain of a shark boat. When a scientist informed Rob about collapsing fisheries caused by over-fishing, Rob decided to leave his life at sea.

In 1993, Rob got an old wheel and kiln, and his interest in clay was born.  He took classes at the John C. Campbell Folk School in Brasstown, NC, where he would later become the Clay Studio Assistant and a frequent pottery instructor to both adults and children. He became an avid student and fan of North Carolina pottery and fell so in love with the history and culture of the region’s folk potters, that he moved to the Blue Ridge Mountain community of Brasstown and opened his own studio.

His biggest inspiration is the late Burlon B. Craig, a Catawba Valley potter in Vale, NC, who was one of the last remaining traditional folk potters in North Carolina. B.B. Craig had been a folk potter since the 1930s, when most potters in the area were self-sufficient farmers who spent their winters making useful items that members of their community needed like cook-ware, dishes and jugs. They used only local resources and made everything themselves, from digging their own clay and making their own glazes to building wood fired kilns with handmade bricks. It was a lifestyle and art that Rob admired and would emulate, along with the face jug, a unique piece of southern pottery that the region had been producing since the 1700s.

Rob has been potting for over fifteen years now. On a visit to his studio you may encounter beautifully glazed crocks and cookware, whimsical face mugs and jugs, life sized piggy banks and other “big pots.” You may even see stoneware in rare colors that Rob mixes up himself, like brilliant, deep, dark reds, Brasstown Gold, and the soon to be extinct, Albany, whose main ingredient comes only from Albany NY.  Rob also hosts “Face Mug Parties” at his studio to introduce other to the joys of clay, occasionally taking his brand of fun out into the community at local hospitals and hospices. He enjoys donating his work or time to good causes like the Empty Bowls program to feed the hungry and REACH of Clay County, a domestic violence support group.

Despite all the hard work, Rob says he would be happy to throw clay for the rest of his life and when his time comes, you can just cremate him in his big kiln and save his ashes for the next wood firing. Until then, he’ll be in his studio in Brasstown, telling folks about the wonders of clay.

Purchase fine crafted pottery right from the source. We accept cash and check. From Settawig Rd., near Brasstown, take Dog Branch Rd. all the way to the end of the road and follow the pottery signs. 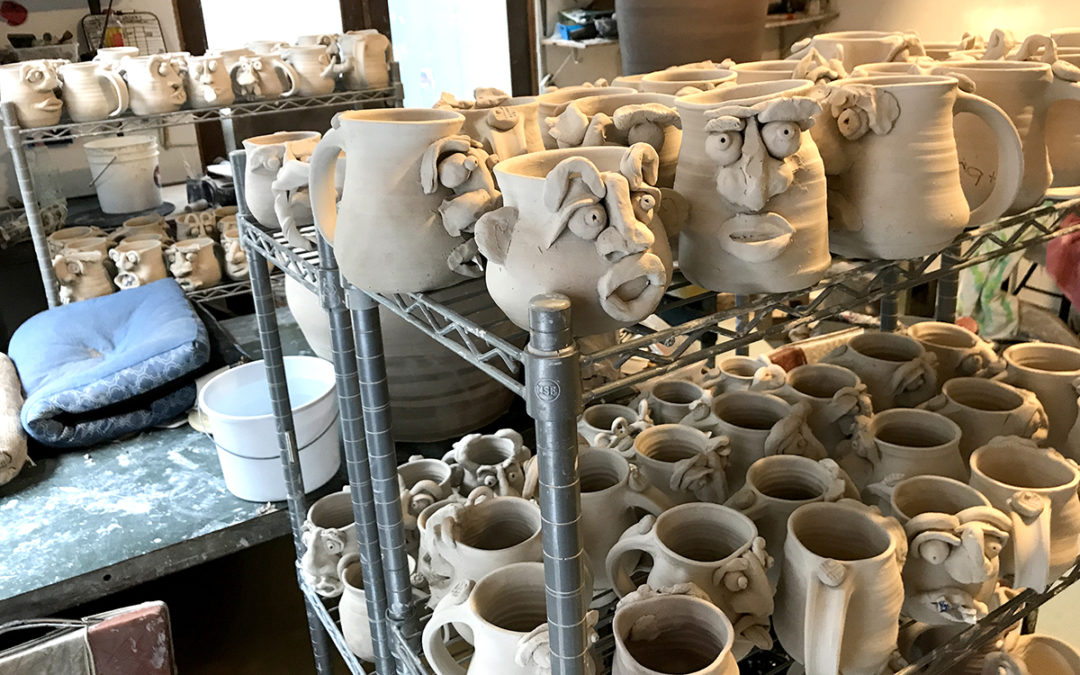 This week Rob visited local schools to teach students about clay. Students of high school and middle school age each made a face mug. Now the studio is full of green face mugs waiting to be bisque fired, glazed, and then hi-fired in the gas kiln. There's over 100 face...